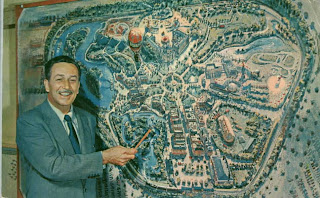 Happy 53rd Birthday Disneyland! I hope when Mickey blows out those candles and makes a wish that he wishes for Great Moments with Mr. Lincoln to be brought back... Steve Martin you are 3 years over due.
Posted by Mr. Lincoln at 11:06 AM 2 comments:

King of the Castle... or Apartment 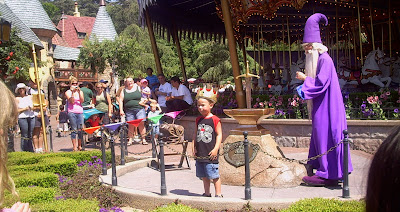 Everyday at Disneyland and the Magic Kingdom in Florida, "Merlin the Magician selects young squires and ladies from throughout the kingdom for this test of strength and courage. If you succeed in this seemingly impossible task, you will be crowned the new monarch of the realm." And accordingly, the King should get to stay in the castle... or Walt's apartment.

What better way to dole out the grand prize for the Year of a Million Dreams promotion (a stay in the Castle or Walt's apartment for a night) than to award it as part of the Sword in the Stone ceremony? It would be a much more creative, entertaining, and public way to implement the overly advertised yet rarely witnessed Year of a Million Dreams campaign- instead of just having a cast member walk up to and say "You've won a stay in the castle."
Posted by Mr. Lincoln at 3:02 PM 1 comment: